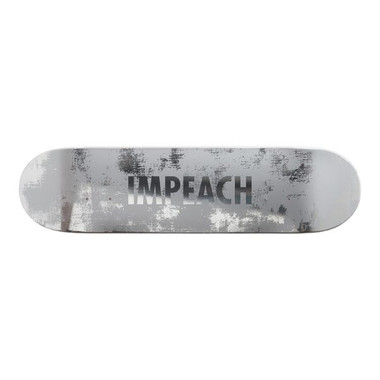 Jenny Holzer's work is defined by her use of text. Whether questioning, describing, or lamenting a specific object or theme, her work’s true purpose is to agitate and disturb its audience at the core – a technique particularly effective when displayed in public spaces and mistaken for an advertisement.

For the Skateroom's second collaboration, the political turmoil and unrest that revolves around the Trump presidency in the U.S. takes center stage in this limited edition set of art decks. 10% donated to Change the Ref and Vote.org*.

Jenny Holzer is an American Conceptual artist best known for her text-based public art projects. For more than forty years, Jenny Holzer has presented her astringent ideas, arguments, and sorrows in public places and international exhibitions, including 7 World Trade Center, the Venice Biennale, the Guggenheim Museums in New York and Bilbao, the Whitney Museum of American Art and the Louvre Abu Dhabi. Her medium, whether formulated as a T-shirt, a plaque, or an LED sign, is writing, and the public dimension is integral to the delivery of her work. Starting in the 1970s with the New York City posters, and continuing through her recent light projections on landscape and architecture, her practice has rivaled ignorance and violence with humor, kindness, and courage. Holzer received the Leone d’Oro at the Venice Biennale in 1990, the World Economic Forum’s Crystal Award in 1996, and the Barnard Medal of Distinction in 2011. She holds honorary degrees from Williams College, the Rhode Island School of Design, The New School, and Smith College. She lives and works in New York.

About Change the Ref

Change The Ref, was formed to empower our Future Leaders by empowering kids with the tools they need to affect change through education, conversation, and activism. It uses urban art and nonviolent creative confrontation to expose the disastrous effects of the mass shooting pandemic. It also brings focus to the NRA’s corrupt maneuvers to buy lawmakers, while forcing solutions which are essential to healing mass shooting victims’ families’ lifelong grief. Change The Ref’s ultimate goal is to give the young generation of survivors and victims a disrupting voice to help lead the way to change – a more peaceful future. #NeverAgain.
The Loss of 17 lives on February 14th, 2018 at MSD High School in Parkland, Florida due to yet another mass shooting, caused a conversation to erupt in our country and around the world and a youth movement to be born. CTR is an organization created to fuel the youth of today, empowering them to lead the way and make impactful changes happen. Founded in the memory of their son Joaquin who was one of the 17 victims, Manuel and Patricia Oliver are committed to making sure that their son’s life and the lives of the other 16 victims are never forgotten and that real change happens to prevent future tragedies like this from happening ever again. The only way that will occur is if we have the ability engage the next generation and the generations after to get involved, fight for their values and beliefs and have their voices heard. To empower our next generation so they can fight for their values, have their voices heard, and impact change for their future.

Vote.org uses technology to simplify political engagement, increase voter turnout, and strengthen American democracy by ensuring the electorate matches the population. To turn out the vote among young people and people of color, Vote.org partners with corporations and other organizations in the civic space.