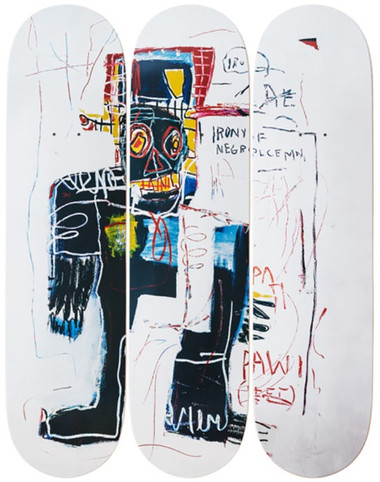 'Irony of a Negro Policeman, 1981' by Jean-Michel Basquiat is a sharp critique on members of his own race by depicting a black policeman. As a black man growing up in New York, Basquiat believed that black people were subjected to the dominance and control of a white male oppressive policing system. The original painting is a mixture of graffiti and expressionism. Open Edition Set of 3 signed decks.

Before Basquiat rose to become one of the most significant artists of the 20th century, his work was already legendary on the streets of downtown NYC. Under the tag SAMO, his poetic and poignant symbols established a visual vocabulary that continues to inspire new generations of graffiti artists to this day.

Copyright 2021 Condemned to Be Free.
All Rights Reserved.