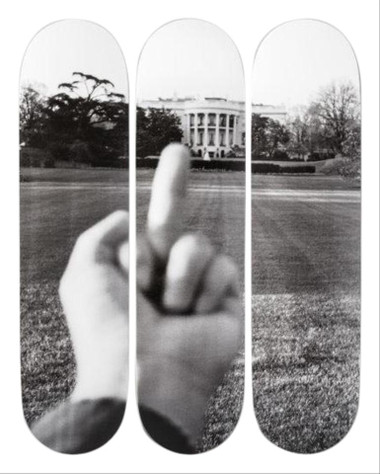 This set of three skateboard decks comes ready to hang with mounting hardware and is limited to 666 editions. Each edition features a screen-print signature.

The Skateroom has teamed up with contemporary Chinese artist and political activist Ai Weiwei for the second time, to launch a limited edition deck of his influential artwork “Study of Perspective – White House”. This new limited edition is based on Ai Weiwei’s provocative artwork that was presented during a controversial art exhibition "Fuck Off" which ran alongside the Third Shanghai Biennale in 2000.

"Study of Perspective – White House" is an iconic example of a larger body of work by Ai Weiwei that melds art and activism, and is an overt critical response to the current political climate in the United States. Study of Perspective, a series of images shot between 1995 and 2003, shows the artist flipping the finger against different buildings across the globe, either landmarks or symbols of authority. The gesture, captured using a snapshot aesthetic, confronts its viewer with a universal and concise statement of Ai Weiwei's political opposition.

Ai Weiwei is a Chinese contemporary artist and activist renowned for making strong aesthetic statements that resonate across today's geopolitical world far beyond the art world. From architecture to installations, social media to documentaries, he uses a wide range of mediums as expressions of new ways for his audiences to examine society and its values. He is an outspoken champion of human rights and free expression. He is the recipient of the 2015 Ambassador of Conscience Award from Amnesty International and the 2012 Václav Havel Prize for Creative Dissent from the Human Rights Foundation. Ai’s first feature-length documentary Human Flow premiered at the 74th Venice Film Festival in competition. He currently resides and works in Berlin.